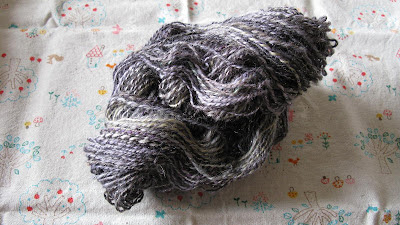 What should I call this? A imagination-along, I could do whatever I wanted, as long as I got inspiration from a given fairytale.
The fairytale is about a picky princess, who thinks the bachelors wanting to marry her is to long, short or fat, and she ends up in poverty, doing tasks her fragile body can't handle. Poor thing... Don't you just hate fairytale princesses? Whining little spoilt bitches.. ;) 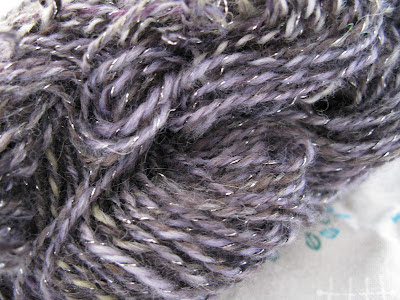 After she'd become poor, she saw the fat, short and tall bachelors in another light, they had money. So she wanted one of them after all, so she didn't have to work, poor thing.
I felt mostly like kicking the princess' ass, and calling her a golddigger, but after calming a little down I decided to spin.
I started by dying some BFL rovings in grey, purple and black. After they had dried, I mixed them up with some light green angelina, some grey/green merino and natural grey alpaca.
It's a 4-ply, 2 threads of wool and 2 thin metallic threads.
The idea behind this was to make something dull, but when you take a closer look, it might actually shine...

Neat yarn. Reminds me of a grandmother's head of hair...;-}

oh I am laughing at the little princess bitch! tooooooo funny!