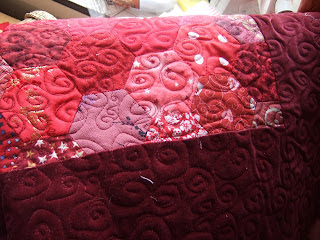 The first, a hexagon tablerunner. I've used all the "weird" fabrics i could find in my stash, and also bought some new ones (that's the most fun part, isn't it) Ordinary cottons, some crushed velvet, satin, brocades and some really thin fabrics.
The frame is a velvet I found in Sweden this summer, and I didn't bring the rest of the project to see if the colors co-ordinated. Which they didn't. I think the frame is way to dark, but on the other hand, it really makes the pinks glow! And why didn't anyone tell me that quilted velvet looks amazing? I'll use this kind of fabric again when I quilt.. Very soon!
The plan is to get the tablerunner finished by (this) christmas, it doesn't look too bad. I've quilted 1/3 so far, but haven't cut the binding. I used the spiral quilting pattern once again because I thought it was sooo much fun.. But then it became boring after 2 1/3 project. I have to think of something new now. 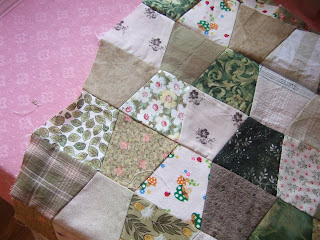 The other one is (surprise, surprise) another tablerunner. In dull greens. I got a load of japanese fabrics from Lappeteknikk and wanted to use them together in a project with some other dull fabrics. I went into my "ugly box" and found some olive florals, went into my "to good to be used box" and found a japanese mushroom-pattern. And I also found some beige and a more bright light green to make it a little more interesting. I've even used some christmas fabric! This isn't like anything I've made before, so I have no idea how it turns out. So far I like it, and I think I know what fabric I'll put around it, as a frame. My favourite, sage! Oe will sage make it to dull? We'll have to see.

I love the tablerunner with pinks and maroons. It does make the pink pop.