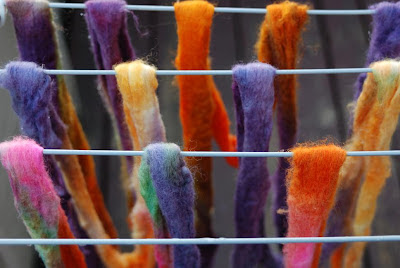 You might wonder, if you aren't a spinner. Or maybe you're clever enough to figure anyway?

Yes, they're rovings. Bluefaced Leicester wool dyed into a badly planned color combination. I wanted to experiment with the idea of purple and orange. And to put a little more life into the yarn they eventually will become, I added some green and pink as well.

At this point it looks like a child went crazy with all her favourite colors, not thinking about the result at all. I have absolutely no idea how this will turn out as a yarn. Or even what it will look like once its dried.
Most of the times when I've dyed rovings, they've turned out better than I thought they would. Acid dyes are really that easy to use. This time I don't know.. Isn't it a bit to clown-ish?
av HanneJ kl. 14:12